The number of commitments to reach net zero emissions from local governments and businesses has roughly doubled in less than a year, as many prioritize climate action in their recovery from Covid-19. Cities and regions with a carbon footprint greater than the emissions of the US, and companies with a combined revenue of over $11.4 trillion (equivalent to more than half of the US GDP), are now pursuing net zero emissions by the end of the century, according to a major report published by the Data-Driven EnviroLab and the NewClimate Institute today.

The majority of these actors are aiming for a zero-carbon economy by 2050, as part of the UN Race to Zero campaign, the largest alliance of local governments, businesses, investors and others aiming for zero emissions in the 2040s. This now encompasses 22 regions, 452 cities, 1,101 businesses, 549 universities and 45 of the biggest investors. New joiners include:

Recognizing the critical yet often overlooked role that small and medium businesses will play in the transition to a zero-carbon economy, today also sees the launch of a new platform, SME Climate Hub, to support small and medium-sized enterprises in joining the Race to Zero. SMEs make up 90 percent of businesses worldwide, employ 2 billion people and have been among the hardest hit by Covid-19.

Corporations such as Ericsson, IKEA, Telia, BT Group and Unilever have committed to support the SME Climate Hub by working closely with the small and medium businesses in their supply chains to reach net zero or negative emissions before 2050.

The event will be convened by Nigel Topping and Gonzalo Muñoz, UN High Level Climate Champions and leaders of the Race to Zero campaign, in collaboration with the Climate Group, to showcase how the shift to a zero-carbon economy is accelerating, and the scale of the opportunity to create good jobs, protect public health and address wider social inequities. The event also marks the one year anniversary of the Climate Ambition Alliance, launched at the UNSG’s Climate Action Summit, which Race To Zero is now mobilizing actors outside of national governments to join. 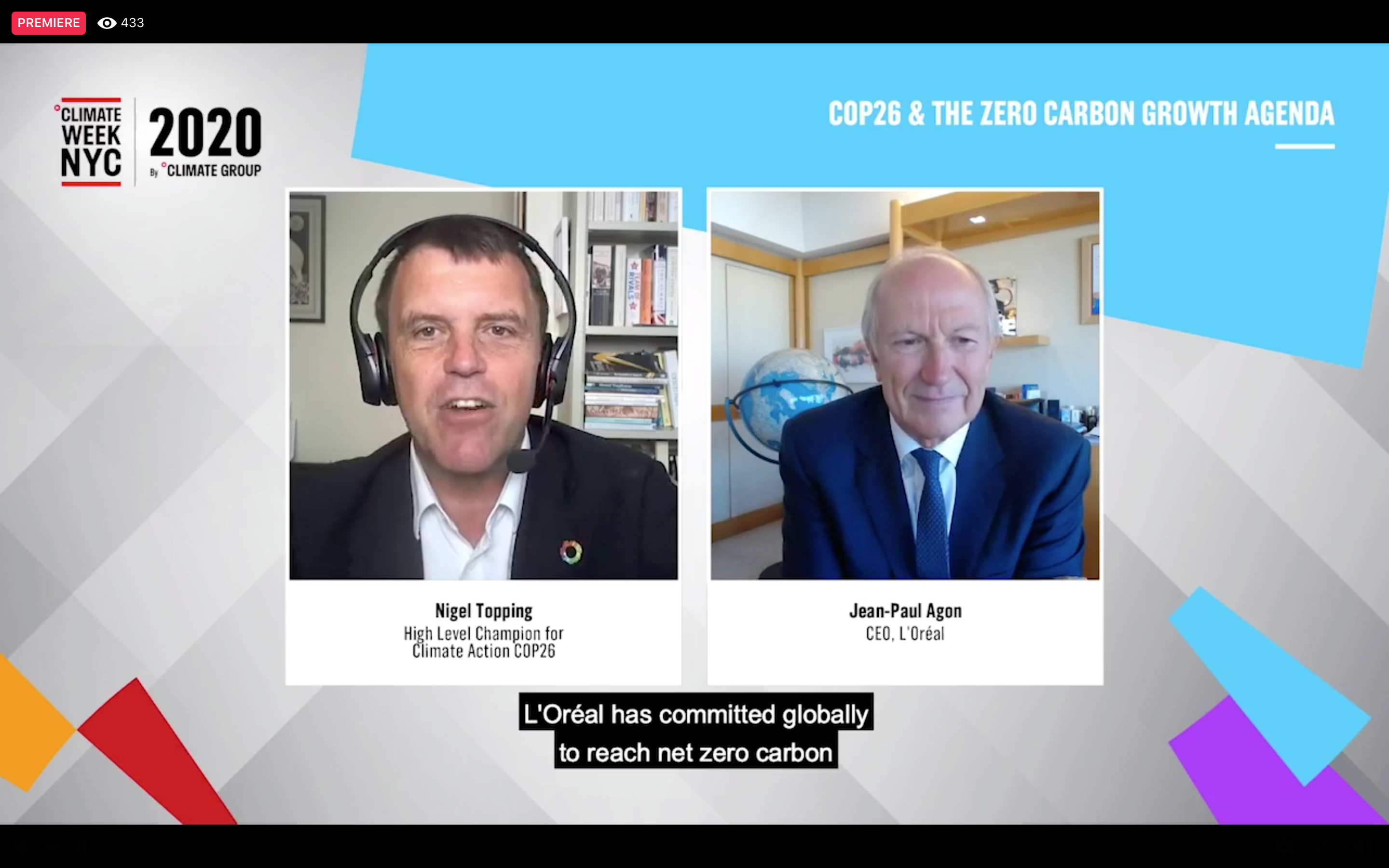 Alok Sharma said: ““Climate change affects every single one of us and we all have a part to play to champion climate action ahead of COP26. Through the Energy Transition Council and the UK’s ambitious climate finance commitments, I hope to drive the transition to cleaner energies, and I urge all businesses, cities and regions to join the Race to Zero coalition.” 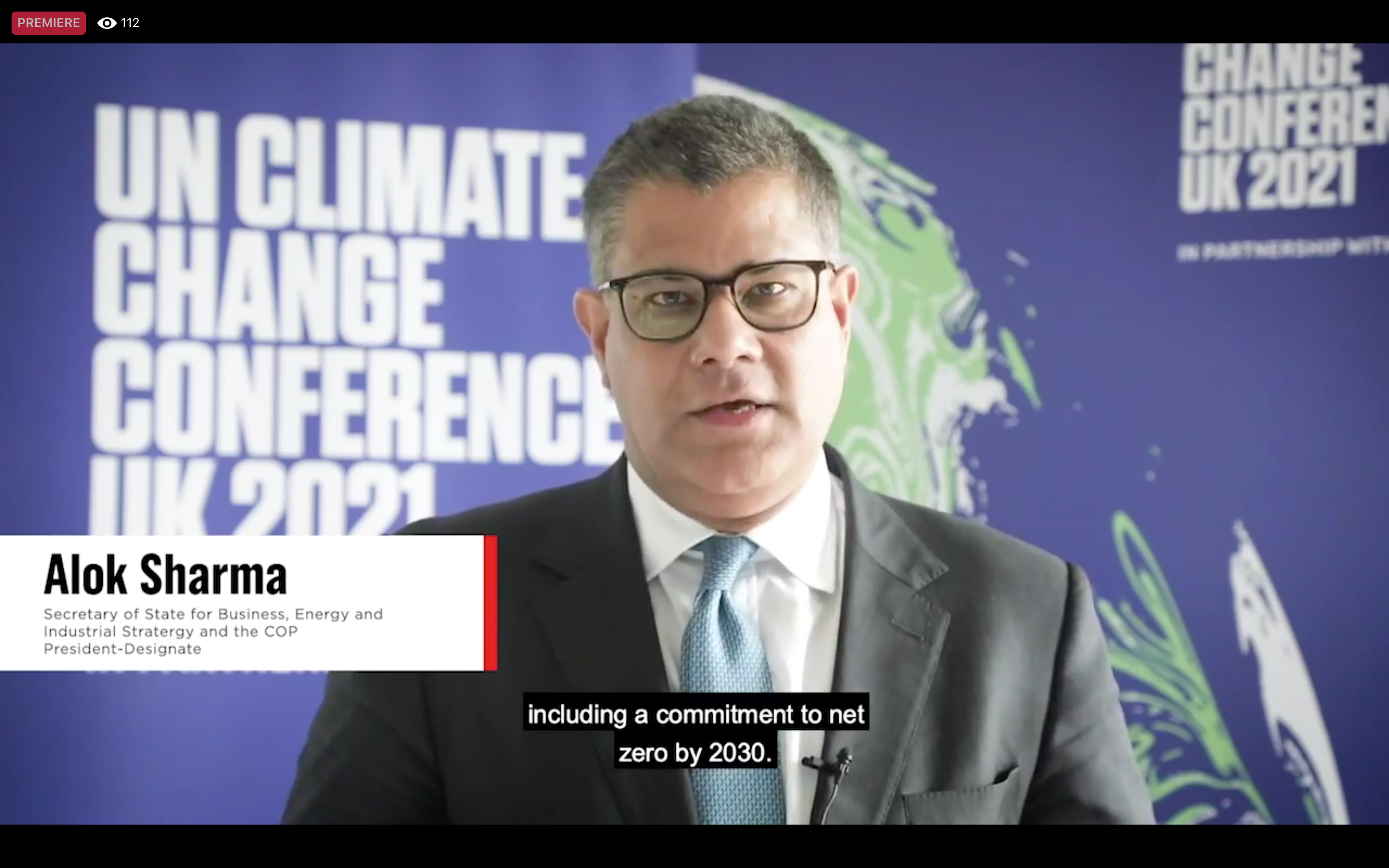 Patricia Espinosa said: “Those involved in the Race to Zero have made a commitment to achieve specific goals and will be held to those promises. The world cannot afford to be let down. Nor can this campaign become something that allows nations to defer action until a later date. It’s about needing more climate ambition and climate action now — in 2020.” 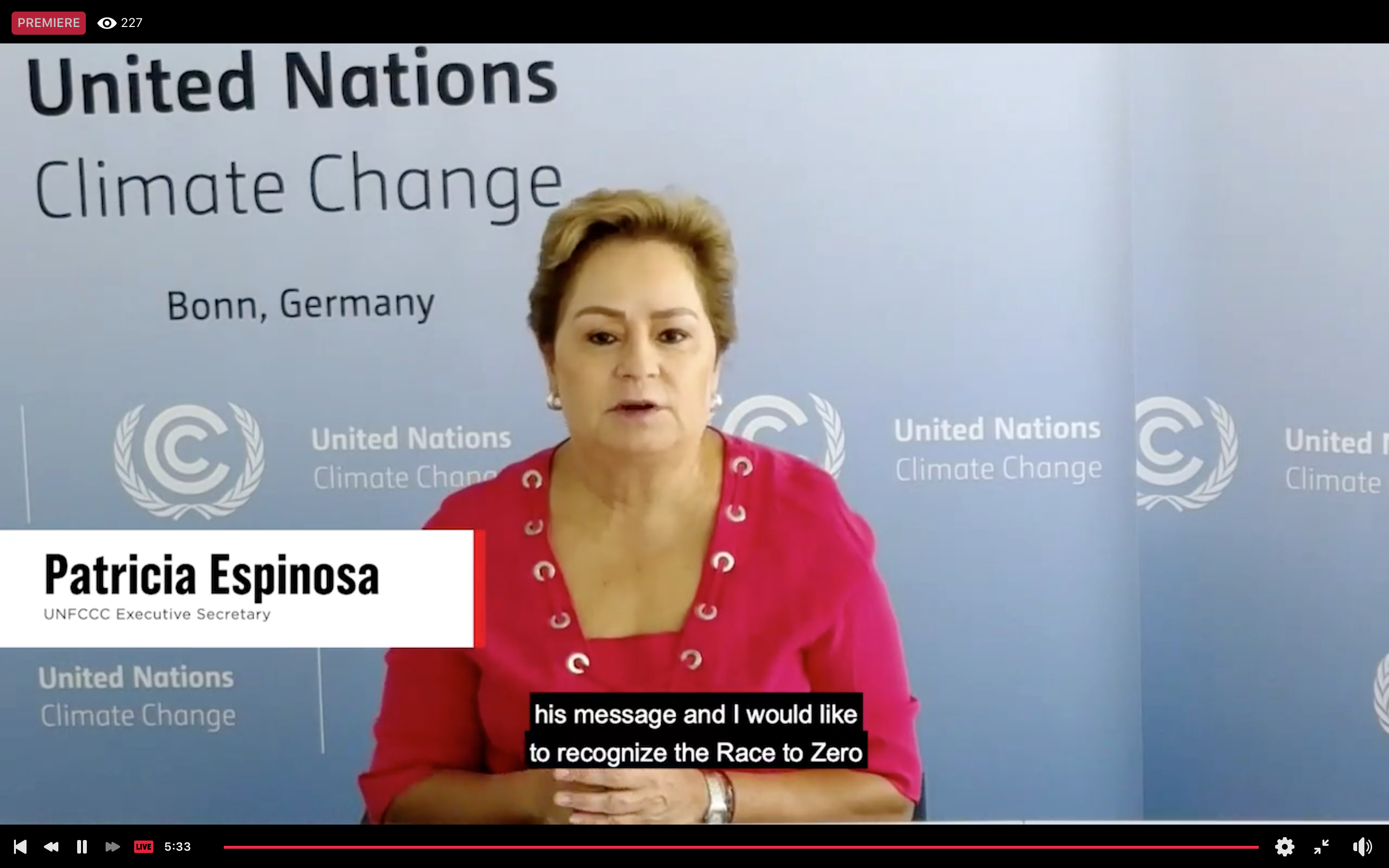 Michael Bloomberg said: “It’s possible to reduce air pollution, improve health, extend people’s lives, fight the climate crisis, and grow local economies. We don’t have to choose just one of those outcomes. They all really do go hand in hand.”

The number of local governments and businesses pursuing a net zero emissions target by the end of the century has grown significantly since late 2019, according to the Data-Driven EnviroLab and the NewClimate Institute, as many prioritize climate action as part of their recovery from the impacts of Covid-19. This includes:

Momentum among cities and regions spans most geographic areas, the report found. It is especially strong in East Asia and the Pacific, where participating cities and regions — including Tokyo, Wuhan, Hong Kong and eight Australian states — represent over 223 million people, or over 10 percent of the region’s total population. Nearly half of US states, from California and New York to Pennsylvania, Nevada and Louisiana, are also aiming for net zero in their overall emissions or in key sectors such as energy.

The report looks at all net zero commitments by cities, regions, businesses and investors around the world. Many of those are already part of the Race to Zero, which requires members to meet a minimum set of leadership criteria to maintain quality control.

Small Businesses Can Join the Race to Zero

Co-hosted by the International Chamber of Commerce (ICC), the Exponential Roadmap Initiative, the We Mean Business coalition and the United Nations Race to Zero campaign, the SME Climate Hub will serve as a one-stop shop that makes it easier for small and medium enterprises to join the Race to Zero. SMEs provide around two-thirds of jobs worldwide, making them integral to reaching net zero emissions by 2050. Many are being required by large corporations to make businesses more sustainable, but have lacked the support needed to transform.

The SME Climate Hub will therefore be crucial in helping to decarbonize the value chains of major corporations, services and consumer products too, by providing the tools, knowledge and best practices that smaller enterprises need to do their part.

Along with Covid-19, climate change is one of the most pressing threats to small business. Left unchecked, climate change could damage business infrastructure, cause business interruptions and closures and stunt economic growth. With 40 percent to 60 percent of small businesses never reopening after a disaster, SMEs must take climate action today in order to survive and thrive tomorrow.

Cities and corporations back healthy recovery

Of the businesses that have joined the Race to Zero, 294 companies have reached the highest standard of corporate climate ambition as part of the Business Ambition for 1.5°C campaign. This includes companies in some of the most energy intensive sectors and those most impacted by Covid-19. Meanwhile, the number of certified B Corporations that have pledged to reach net zero emissions by 2030 — 20 years before the Paris Agreement’s goal — has climbed to 762. Another five new companies now aim to meet the Paris Agreement by 2040, by signing The Climate Pledge, led by Amazon.

Suphachai Chearavanont, Chief Executive of C.P. Group, said: “As a leading Asian conglomerate with our core business in agri-food, C.P. Group has a role to play to reduce the agriculture sector’s carbon footprint and encourage consumers to adopt more sustainable food choices. With our commitment for net zero emissions by 2050, we aim to meet this opportunity by leveraging innovation and working closely with all our partners and stakeholders across our diverse set of businesses in the group around the world.” 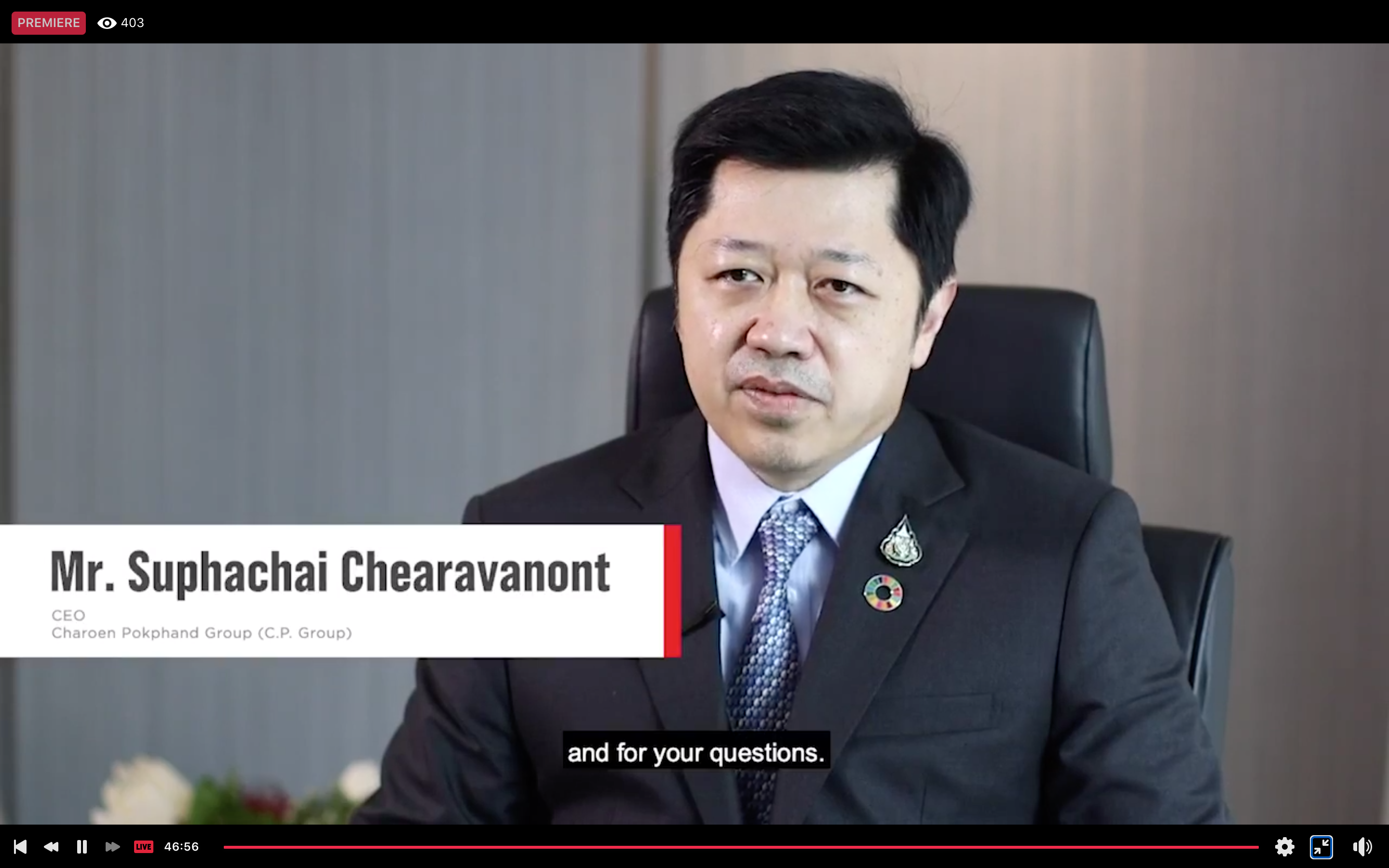 Jan Jenisch, Chief Executive of LafargeHolcim, said: “As the global leader in our industry, LafargeHolcim has a key role to play to address today’s climate crisis. That’s why we are proud to announce our net zero pledge with science-based targets to accelerate green construction and the transition to a net zero world.”

Notable new business arrivals to the Race to Zero include:

The European Union is helping forge the race to zero emissions, with strong private sector leadership backing stronger climate goals. European Commission President Ursula von der Leyen’s announcement last week, proposing that the EU raise its emissions reduction goal for 2030 to at least 55 percent, came on the heels of a call by more than 160 businesses and investors. In the open letter, CEOs said they were determined to work with the EU for an ambitious implementation of the recovery package focused on achieving a green and digital transition.

Brad Smith, President of Microsoft Corporation, said: “Carbon doesn’t respect borders. The only way for us to meet these carbon reduction targets is for governments to boldly step forward and work together towards a zero carbon future.” 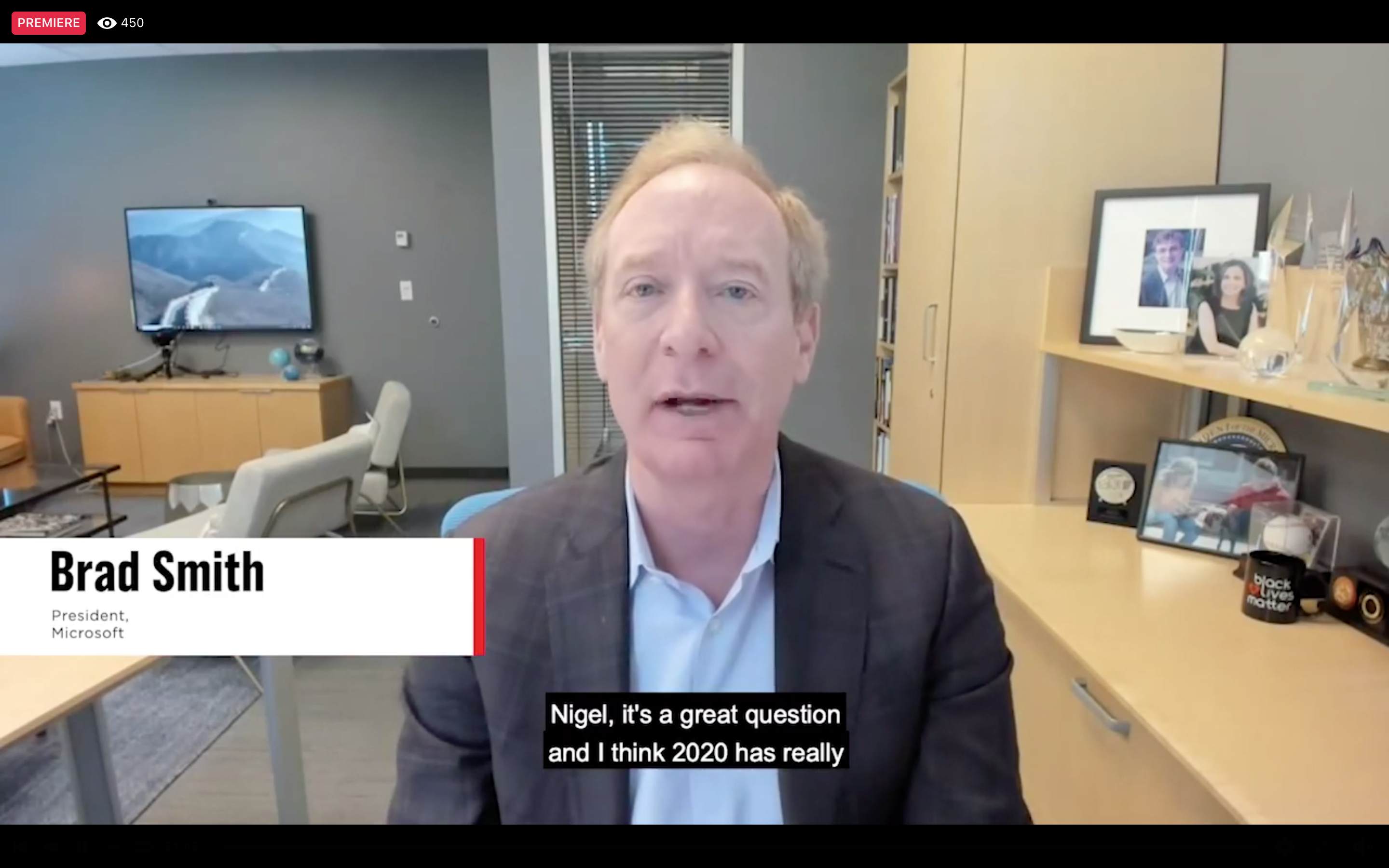 About Race to Zero

Race to Zero is the international campaign for a healthy, resilient zero carbon recovery. Led by the UNFCCC Champions for Climate Action, it aims to bring together net zero commitments from cities, businesses and investors across the climate action community in the run up to COP26. Race to Zero collaborates with the following international networks and initiatives, which have independently been mobilizing net zero commitments. All of them have require their participants to meet the Race to Zero’s minimum criteria: