There are more than 10 productions with new, national, international and relevant content about climate change.

The event will be transmitted free of charge from January 8 to 17, 2021 through the digital platform of For the Climate.

Some of the works exhibited are: Sanctuary, hosted by Spanish actor Javier Bardem or The Last Ice, which shows the struggle of the Unuit people to save the Arctic. Also present will be Chilean productions such as Pewen: dirá la Tierra and Estado Salmonero.

Organized by Ladera Sur, under the sponsorship of Re-Acciona por el Clima; a program promoted by the Ministry of the Environment, the European Union and the International Festival of Social Innovation, and the collaboration of Jackson Wild.

Melting glaciers; our relationship with nature; the deterioration of ecosystems; uncertain future; renewable energies; impacted flora and fauna; and struggles for territories. These are just some of the many topics covered by the documentaries already confirmed for Eurocinema for the Climate, the next film festival focused on climate change productions, which will take place from January 8 to 17, 2021 through the digital platform of For the Climate. And it will be broadcast free of charge to the public.

“Next week we will start this festival, in which the protagonists are European audiovisual productions, including also some national ones. All are focused, from different points of view, on the problem of climate change. Now we can finally confirm the documentaries that will be part of this project,” says Martin del Rio, director and founder of Ladera Sur.

Thus, this activity organized by Ladera Sur, under the sponsorship of the Ministry of the Environment, the European Union and the International Festival of Social Innovation (FiiS), and the collaboration of Jackson Wild, will feature 11 documentaries from Germany, Belgium, Spain, Croatia, Belgium, France, Holland, Greenland and Norway. In addition, there will be 8 audiovisual works from Chile.

In addition, there will be question-and-answer meetings with some of the producers and directors of the exhibited documentaries. They will talk to us, under their perception, about environmental problems and possible solutions to mitigate climate change and help our planet. Something that, in part, they have captured in the documentaries present at the festival. 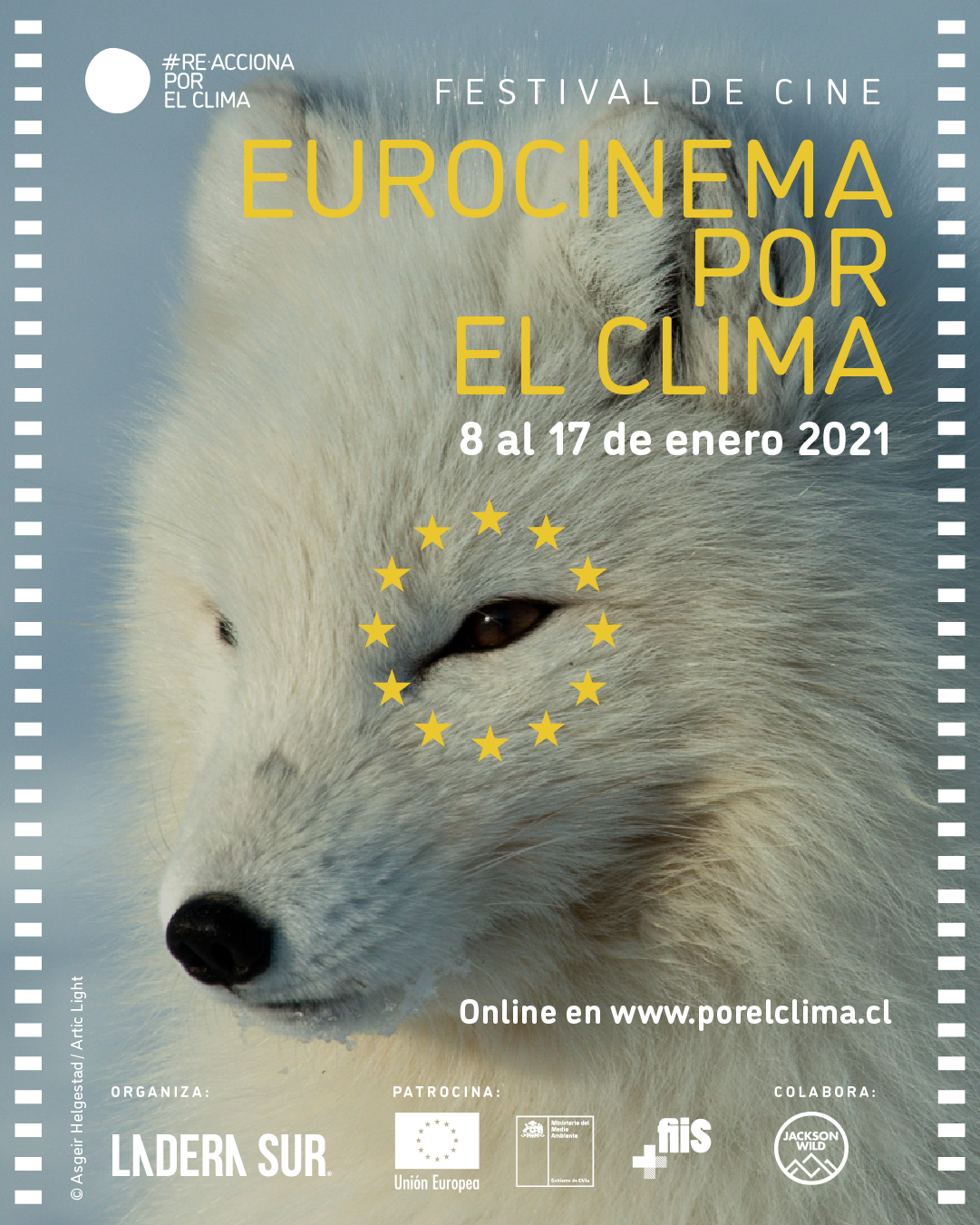 The European documentaries that will be shown

As a preview, we bring from Spain the production Santuario, conducted by Spanish actor Javier Bardem and directed by Alvaro Longoria. This is the story of a media, scientific and political campaign to protect the Weddell Sea off the coast of Antarctica through the creation of an ecological reserve.

The German documentary Wild Innsbruck, by director Patrick Centurioni, which shows the inevitable encounters between humans and animals in the Alps, will also be shown. From this country we will also show the documentary Taste the Waste, by director Valentin Thurn.

From France, we will share the short documentary Ecotopia, by the directors Christian Paureilhe and Monica Regas, which shows different projects that seek to rehabilitate desert areas while respecting the cycles of nature. From this country we will also show the documentary Demain (Tomorrow in english), by the directors Cyril Dion and Mélanie Laurent. Here, in the midst of a humanity advanced by the collapse of ecosystems, the protagonists set out to explore the world in search of solutions capable of saving the lives of their children. You will also be able to see the documentary Longyearbyern, a bipolar city, by the director Manuel Deiller.

A short film that you can see at Eurocinema for Climate will be the Croatian film, The Last Well, by director Filip Filkovic. It takes us to 2037, the year in which the last well is guarded by a lonely man who survives by charging for access to the fountain. But his life is threatened.

Also, from Belgium we will exhibit Oro Verde (Green Gold in english), by director Sergio Ghizzardi, a research documentary that leads to the heart of renewable energies and other solutions that have been presented as a solution to the energy, economic, financial and environmental crises. But is our economy compatible with clean and fair development? What is the price to pay for our model of society to continue to exist?

A National Geographic production will represent Greenland. It is The Last Ice, by director Scott Ressler, which places us in the Arctic and the traditions of the Inuit people. Decades of colonization have sought to take advantage of the natural resources of the Arctic, which has affected not only climate change, but the struggle of the Inuit to preserve their fragile homeland.

Belgian cinema also comes to this festival in the hands of Samuel in the Clouds, by director Pieter Van Eecke. Although it is a Belgian production, it takes us to Bolivia, where Samuel, a former ski lift operator looks out the window from the mountains of the altitude, where his family has worked for generations. But the glaciers are melting and the snow is missing, so Samuel pays homage to the spirits of the mountains as scientists analyze the changes.

From Denmark, he will be present in the documentary Good Things Await, in which a farmer is the protagonist. In this documentary, he shows how he makes his products in a specific way, hand in hand with his vision of life, which the authorities do not support.

Finally, from Norway we will show Longyearbyern, by director Jerome Mignard, which will be accompanied by another Norwegian production: My Journey with a Polar Bear, by director Asgeir Helgestad and the Smithsonian Channel production. In it, the director shows his four-year encounter with a mother polar bear. Throughout this time, he records the melting of the ice and the consequences of this for the habitat of species such as bears. The planet is home to all of us, can we afford to ignore it?

We could not leave out of this festival great Chilean audiovisual productions that have shown realities of the country and invite to think locally about the impacts that climate change and human activities are having in Chile.

Among them, documentaries focused on the trees and the iconic araucarias, such as Pewen: dirá la Tierra, by director Victor Leyton, which tries to show the biocultural role of the araucaria and, through different looks, to answer what is happening with this tree that is sacred to the Pehuenches.

In addition, Araucaria araucana, by directors Santiago Serrano and Remi Rappe, joins the history of the araucaria and its incredible link with the Pehuenche. From the same director, we will share Memorias de los Árboles, a documentary series in which trees like the queñoa, the Chilean palm, the araucaria, the larch or the bell pepper, are the ones that tell their own story.

We will also share eight educational documentaries of the COP25, developed by the European Union; and we will transmit the documentary Cuenta Regresiva (Countdown in english) by Fernando Caro.

It will be possible to learn about the huillín through the documentary Huillín, Tras las Huellas del Gato de Río (Huillín, In the Footsteps of the River Cat in english), from the Fundación Legado Chile. And about impacts and reality of the salmon industry in Chile through the documentary Estado Salmonero (Salmon Farming in english), by the directors Daniel Casado and Alex Lowther.

Finally, you will also be able to see productions such as Lawqa, que el Parque Vuelva a Parque (Lawqa, let the Park be Park again in english), by director Raimundo Gómez, in which fly fisherman Gabo Benoit travels lonely routes in the Lauca World Biosphere Reserve. There he documents the abandonment of this space, the difficulty of life for the inhabitants of the region and how it has been transformed into a dump for mining waste and tailings.  And in Aculeo: Donde se Juntaban las Aguas (Aculeo: Where the Waters Meet in english), by producer Ignacio de Geyter and filmmakers Cristian Campino and Juan Cristóbal Gillmore, which recounts the beginnings of the problem of a natural lagoon that today is dry. Drought and water shortage play an important role, which brought consequences for the people and the ecosystem of the place.